The etiology of delayed gastric emptying (DGE) after pylorus-preserving pancreatoduodenectomy (PPPD) is unclear. This study aimed to ascertain the incidence of DGE in a transmesocolic anastomosis (TA) versus an antecolic anastomosis (AA) group of patients.

Overall, no significant differences in DGE were found between groups. AA could be a protective factor for DGE when no other surgical complications appear. 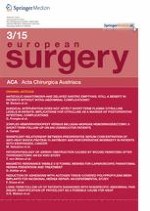 Long-term follow-up of patients diagnosed with nonspecific abdominal pain (NSAP): identification of pathology as a possible cause for NSAP