We analyze the age and sex distribution of the reported COVID-19 deaths in Austria. In accordance with international studies, the Austrian data also suggests that the risk of death increases substantially with age. The observed age dependency of the proportions of registered COVID-19 deaths in relation to the population sizes in the age groups is approximately exponential, similar to the age dependency of the general age specific mortality rate. Furthermore, we compare the general age specific mortality rate in Austria with the estimates of the SARS-CoV‑2 infection fatality rate by Ferguson et al. (2020). The parallels to the general age specific mortality rates do not imply that COVID-19 does not pose an additional risk. On the contrary, it follows from the structure and magnitude of the infection fatality rate that it is substantial, especially for higher age groups. However, since in many cases persons with severe pre-existing conditions are affected, it is not yet possible to estimate what effects COVID-19 will have on life expectancy.
Hinweise

Martin Posch, Peter Bauer, Alexander Posch, and Franz König declare that they have no competing interests.
Open Access This article is licensed under a Creative Commons Attribution 4.0 International License, which permits use, sharing, adaptation, distribution and reproduction in any medium or format, as long as you give appropriate credit to the original author(s) and the source, provide a link to the Creative Commons licence, and indicate if changes were made. The images or other third party material in this article are included in the article’s Creative Commons licence, unless indicated otherwise in a credit line to the material. If material is not included in the article’s Creative Commons licence and your intended use is not permitted by statutory regulation or exceeds the permitted use, you will need to obtain permission directly from the copyright holder. To view a copy of this licence, visit http://​creativecommons.​org/​licenses/​by/​4.​0/​. 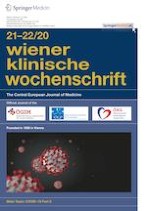 Impact of COVID-19 on Christmas