After the February Revolution in France in 1848, Louis Napoléon Bonaparte, the nephew of Emperor Napoleon I, became the first President of the French Republic. On December 2, 1852, Louis Napoleon Bonaparte proclaimed the Second Empire by becoming Emperor of the French under the name of Napoleon III. This period corresponds to the Industrial Revolution in France, marked by notable medical advances that allowed surgery to also enter into the modern era.

In this historical study, we assessed the surgical advances during the period of the Second Empire until 1870.

We detailed the implementation of general anaesthesia in surgical procedures as well as the uncertainties it caused in its beginning and the efforts led by the surgical community to reduce the rate of postoperative infections, but also the technological advances of the industrial era leading to the discovery of surgical haemostasis.

This study highlights the work of the greatest French surgeons who practiced under the Second Empire of Napoleon III, a period which saw the birth of modern surgery in France.
Anzeige
Vorheriger Artikel Impact of previous abdominal surgery on the outcome of fundoplication for medically refractory gastroesophageal reflux disease in children and young adults
Nächster Artikel Coping with a lack of evidence: living-donor kidney transplantation in the initial phase of the SARS-CoV-2 pandemic 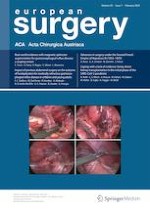 Surgery senses the joy of nature and sciences

Gender-specific prevalence of sacrococcygeal pilonidal sinus disease in Turkey: A retrospective analysis of a large cohort

Coping with a lack of evidence: living-donor kidney transplantation in the initial phase of the SARS-CoV-2 pandemic