To analyze the drug adherence rates and overall survival for in patients treated with arbiraterone acetate (AA) for castration-resistant prostate cancer (CRPC).

The database of the largest insurance company in Austria (Wiener Gebietskrankenkasse) was analyzed. Data on all CRPC patients with at least one prescription of AA between November 2011 and December 2014 in the postchemotherapy setting were collated and compared to the Austrian death and hospital admission statistics. Drug adherence was estimated by the medication possession ratio (MPR).

In the past 15 years oral anticancer medications have become more widely available for the treatment of a variety of cancers and have increasingly been used as an alternative to intravenous (iv) therapy. This trend is also demonstrable in the management of advanced prostate cancer (PC). The introduction of the oral drugs abiraterone acetate (AA) and enzalutamide [1] has revolutionized the management of castration resistant prostate cancer (CRPC). The availability of oral anticancer drugs aligns with the preferences of cancer patients and may help to improve patient quality of life and reduce the time spent in healthcare settings; however, the availability of oral drugs induces the issue of drug compliance or adherence [2, 3]. Both terms define the extent to which patients take medications as prescribed by their healthcare providers. Without adequate adherence, the efficacy of oral drugs might fall below of those administered intravenously. The second threat of an oral drug, particularly if well tolerated such as AA and enzalutamide, is that these drugs might be prescribed too liberally.
Prompted by the paucity of data of both aspects we investigated these issues by analyzing the database of the largest public health insurance in Austria (Wiener Gebietskrankenkasse, WGKK). This database was compared to the Austria death statistics and hospital admission registry. For decades Austria has had a public healthcare system with compulsory state insurance. The high prevalence of CRPC as well as the cost of these drugs further emphasize the economic impact of drug adherence and prescription pattern.
Anzeige
The aim of this study was to evaluate (i) adherence patterns for AA and concomitant prednisone in patients with CRPC in Austria, (ii) the overall survival of CRPC receiving AA in a real-life setting and (iii) hospital admission rates in this cohort by using a large administrative healthcare database.

After receiving institutional board approval from our hospital the prescription database of the largest public insurance company in Austria the WGKK was reviewed. Data from all patients with at least one prescription of AA from November 2011 to December 2014 were extracted, where AA [1] is typically prescribed at 1000 mg daily taken orally with 10 mg oral prednisone. The following data were extracted from this database: age, data of the first AA prescription, number of AA prescriptions, number of hospital admissions and duration of hospital admissions. This database was matched to the Austria death and hospital admission statistics.
Adherence [2, 3] was calculated using the medication possession ratio (MPR), which is the sum of all days of AA supplied within a given period, divided by the total number of days in that period. There is no consensus standard for what constitutes adequate adherence. Some trials consider rates of greater than 80 % to be acceptable [4, 5].

The SPSS 17.0 package for Windows (SPSS, Chicago, IL) was used for statistical analysis and all the values were expressed in terms of means ± SD for the efficacy analysis. Survival time was calculated from the initiation of AA and the date of death. Patients alive were censored at the last known follow-up date. Overall survival (OS) rates were estimated using the Kaplan-Meier method.
Anzeige

In Austria the vast majority of chemotherapies for CRPC are given on an outpatient basis in urological or oncological institutions. For reimbursement reasons, these patients are admitted on a day case basis and are included to the hospital admission statistics; therefore, we have deleted all admissions for 24 h or less from further analyses.
The mean length of hospital stay was 4.5 ± 4.8 days (median 2 days). The duration of the hospital admissions was as follows: 1–2 days 55.8 %, 3–4 days 13.4 %, 5–6 days 6.9 %, 6–8 days 7.3 %, 8–10 days 5.5 % and >10 days 11.1 %. The patients in this series spent a considerable time of their remaining life in hospital care. Of all 270 patients only 19 (7 %) were not hospitalized during their remaining life span. On the other end of the spectrum 71 (26.2 %) spent more than 50 % of their remaining life span in hospital care (Fig. 1b).

The main limitation is the lack of any clinical information (e.g. indications, previous chemotherapy, staging and reason for drug discontinuation). Finally, the data on hospital admissions have to be interpreted in the context of the Austrian healthcare system where admission to hospital care is voluntary and free of charge to the patient; furthermore, there is no incentive to discharge patients as early as possible.
Anzeige

This Austrian prescription database allows some relevant insights into the outcome of patients treated with AA for CRPC in a real life setting. Drug adherence was satisfactory and OS was shorter as compared to the pivotal phase III trial. The high early mortality rate in our series suggests poor patient selection in real life. One quarter of patients experience long-term survival. The hospitalization rate within this cohort was substantial.

None
Open access funding provided by Medical University of Graz.

B. Mohamad Al-Ali, G. Kramer, S. Madersbacher, and I. Berger declare that they have no competing interests. 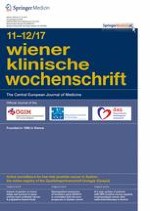