Traditional environmental risk factors in inflammatory bowel disease (IBD), ulcerative colitis (UC) and Crohn’s disease (CD), were examined as part of the retrospective epidemiologic study conducted in Vukovar-Srijem County, north-eastern Croatia in 2010. The geographical variations in the frequency of IBD in Croatia have been observed, which is also the trend in the Central Eastern European region and Europe as a whole, indicating the influence of environmental and lifestyle factors. However, the data on the spread of environmental IBD risk factors are still limited. The purpose of this study was to analyse the traditional environmental risk factors in IBD on our cohort sample, including measles virus infection and vaccination (MMR vaccine—Mumps, Measles, Rubella), tonsillectomy, appendectomy, current and former cigarette smoking and use of oral contraceptives in women.

This retrospective, case-control study was performed as a part of a wider epidemiologic study aimed at assessing the incidence, prevalence and clinical expression of IBD, in Vukovar-Srijem County (population: 204,768; 2001), which is a lesser developed part of the continental Croatia that experienced deep demographic changes in the recent past. IBD patients were identified according to the hospital’s patient records. There were 119 UC patients and 31 CD patients of a total of 150 patients in the cohort. A total of 150 individuals, volunteers, not having a diagnosis of IBD, age- and sex-matched, were used as the control group. Information on examined risk factors were obtained from all subjects in a previously conducted interview. Patients were contacted personally or by phone and interviewed by a gastroenterologist.

No association was found between smoking and tonsillectomy and risk of IBD. Our results do not support the idea of oral contraceptives use as a risk factor for IBD. Frequency of appendectomy was the lowest in UC patients, suggesting that appendectomy decreases the risk of UC, contributing the earlier results. MMR vaccination seemed to be associated with Crohn’s disease. These results can add value to our understanding of the increasing incidence of IBD in Croatia and other Central Eastern European countries and can be introductory to future large-scale research. 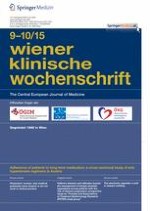 Patient’s behavior and attitudes toward the management of benign prostatic hyperplasia among patients with the risk of disease progression: prospective study by “Prostate and Expectations of Treatment Epidemiology Research (PETER) study group”

The electronic cigarette: a wolf in sheep’s clothing